“My voyage turned prosperous when I suffered a shipwreck. It was well done of thee Fortune, thus to drive me to philosophy.”  Zeno of Citium

Having purchased a quantity of purple dye from Phoenicia, (the exclusive colour that only few could afford to wear in their robes), a young merchant from Cyprus called Zeno saw his ship with all his goods go to the bottom of the sea, as he was shipwrecked near Athens. He saved his life by swimming to the shore and made his way from the coast as far as Athens.

Zeno wandered about the streets of the city, being now about thirty years old, ruined and devastated. Perhaps looking for consolation, he sat down by a bookseller’s stall, took up a book about the life of Socrates and began to read. He became more and more absorbed and amazed by the life and teachings of the man who, as they used to say, “brought philosophy down from the heavens to the earth”. He then asked the book-seller if such men could be found in Athens, the book-seller pointed to a man that was passing by, and said, “Follow that man.” The man walking by with a staff and satchel and looking like a beggar, was Crates of Thebes, a Cynic philosopher. Zeno probably didn’t know he was about to join the most radical philosophic school to be found in the ancient world.

A TRAINING FOR LIFE

From the day Zeno became Crates’s pupil, he showed a strong bent for philosophy, though philosophy under Crates was probably not what he expected. There were no exchange of subtile ideas or lectures, but a rigorous training and a tough life of constant askēsis. The term askēsis, which means “exercise” or “practice,” is appropriated from athletic training.  If he wanted to be a philosopher, he will have to learn to live in accord with Nature and in opposition to conventions.

The askēsis of Zeno as a Cynic philosopher envolved living in the streets, sleeping on the ground, walking barefood, dressing only with a cloak, being exposed to cold, keeping a frugal diet based on lentil-soup and dried figgs, bearing social rejection with indifference and speaking out against iunjustices and social norms. Their shamelessness, and shocking behavior gave them the nickname of “Cynic” the Dog-like.

“Our philosophy is called Cynic not because we are indifferent to everything, but because we aggressively endure what others, due to being soft or general opinion find unbearable.” Crates

Zeno endured the Cynic lifestyle with discipline, but he was a well-raised and shy man, and Cynic shamelessness seemed too much for him. Crates had noticed his sense of shame form the first day and, so desirous of curing this “defect” in him, gave him a potful of lentil-soup to carry through a busy quarter. When he saw that Zeno was ashamed and tried to keep it out of sight under his cloak, Crates broke the pot with a blow of his staff. As Zeno began to run off in embarrassment with the lentil-soup flowing down his legs, Crates chided “Why run away, my little Phoenician?”, “nothing terrible has befallen you!

They repudiated material wealth and social conventions in favor of a life of simplycity.  The reward was  a radical freedom, in three related forms: eleutheria, freedom or liberty, autarkeia, self-sufficiency, and parrhēsia, freedom of speech or frankness. Cynics wanted to correct society, to take it back to a primordial simplicity in which there were no classes nor inequalities, just human beings living virtuously and close to Nature. Their way of doing philosphy was by embodying what they preached.

But not all was physical endurance in their philosophy, they could also be intellectualy challenging. Their sharp and clever use of irony and humor was much feared by sophists and rhetoricians. They called the mental confusion which most people are wrapped-up Tuphos,  which means mist or smoke. The Cynics sought to clear away this fog and to see the world as it really is.

Crates and Zeno would gather at the Cynosarges gymnasium with other Cyinics for debates and lectures. Crates’ wife Hipparchia, had left a wealthy life to follow her husband  and live in the streets of Athens. They had two children that they raised up in the Cynic way, bathing in cold water and using a cradle made from a tortoise shell. She became a famos philosopher, for Cynics thought that both men and women, could be equally tough and virtuous. 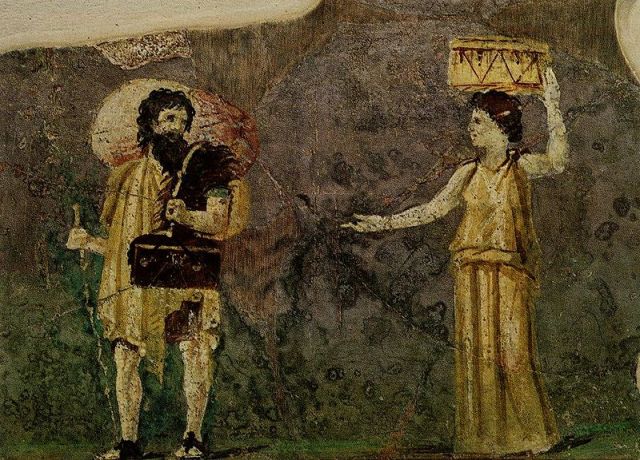 Roman fresco depicting Crates of Thebes with Hipparchia, his wife and also a cynic philosopher.

Cynic philosophy was founded by Antisthenes, a disciple of Socrates in a public gymnasium called the Cynosarges, which had a renown wrestling school and a sanctuary dedicated to Heracles. It was common that gymnasiums would offer philosophy lectures and disputations. In fact, there were three great public gymnasiums in Athens; the Academy, the Lyceum and the Cynosarges, each of which rendered famous by association with a celebrated school of philosophy.

The remains of a Gymnasium in Pompeii. Not different for those in Athens.

Although a democracy, Athenian society was aristocratic and elitist. Antisthenes and the Cynics gathered at the Cynosarges because it was the gymnasium for the nothoi, the illegitimate children, the bastards; those without Athenian citizenship because of being born to a slave, a foreigner, a non married couple or a prostitute. Antisthenes was the son of a Thracian woman, and that made him non-Athenian citizen and did not have normal citizenship rights, such as inheritance. Cynicism became the philosophy of the outsiders, those rejected by Athenian society, so Cynics responded by rejecting Athenian values.

Zeno’s teacher, Crates, had left a wealthy life in Thebes to follow his teacher Diogenes of Sinope, the most famous Cynic philospher. He used to live inside a large ceramic jar near the market place. The fame of Diogenes as a philosopher was so great that even Aristotle sent his pupil, the young Alexander the Great to meet him. One morning as Diogenes was relaxing in the sunlight and Alexander appeared, thrilled to meet the famous sage, asked if there was any favour he might do for him. Diogenes replied, “Yes, stand out of my sunlight”.

Zeno respected and loved his teacher but his mind was not fully satisfied with such radical way of life. Begging on the streets for a living constructive nor edifying. Living socially and decently was also natural in human beings, and he didn’t . He begun atending Plato’s Academy and Aristotle’s Lyceum. One day as he was attending a lecture in the Academy, Crates apeared, grabbed him and dragged him outside by force. Nevertheless he will continue to study with other schools; the Megarians were famous for their use of logic, the Lyceum for the natural sciences, the Academy for its metaphysics.

Around 301 BCE, Zeno began giving publich teachings in Athens under the painted colonnade next to the Agora. The colonnade was known as the Stoa Poikile in Greek, which gave the name to his schools. It will become the most successful school of thought of Greco-Roman civilization. They will be called the Stoics.

His philosophy could be described as a synthesis of three major branches of Greek philosophy; Heraclian Physics, Megarian Logic, and Socratic Ethics. 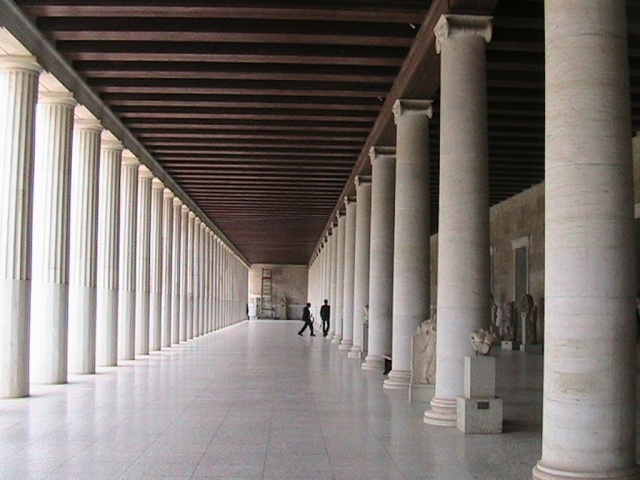 Platonist, Cynics, Stoics, Epicureans or Skeptics, offered their students not only ideas, but an integral worldview and expected their students to undertake a coherent way of life, to be consistent, with their principles and the doctrines of their school.

The role of the ancient philosophy teacher was to encourage his students to live the philosophic life, whose end was  eudaimonia  (a flourishing life). Depending of the school, a student would have to learn logic, geometry and dialectic, but he may also have to get used to sleep on the ground, work in a garden, walk barefood, meditate on his own death, or compose poetry.

The purpose of life is Eudaimonia, meaning a good spirit, a flourishing life. Not exatly the same as happiness, Zeno described it as a euroia biou “good flow of life” .

That is achieved by a life acording to Nature, homologouménos têi physei zên wich is the same as according to the Logos or Reason.

That Areté (Virtue, Excellence) is what guides us toward a good flow of life, and it is sufficient for happyness.

“I have no desire to suffer twice, in reality and then in retrospect.”
― Sophocles, Oedipus Rex

My general focus in this blog is with Stoicism, becasue it is the best representative of the Hellenistic philosophies, the most infuencial in the Roman world and the one that has left a longer mark in the Western spirit. In this blog I will be exploring the practice of Stoic philosophy as a way of life, since I found to be surprisingly useful for the kind of situations I encountered while traveling around the world.

The Stoics believed that everything in the universe, including mankind, was linked by a divine force (Logos), which they also called Reason. Zeno considered that by living in conformity with Nature, mankind would live in conformity with the Logos, and this was the only way to attain happiness.

Most of what we know about the Stoics comes from the writings of the politicians Seneca and Cicero, the freed slave Epictetus and the Emperor Marcus Aurelius. Stoicism was a major influence in successive centuries for Neoplatonist, Christians and Jewish philosophers. Almost forgotten throughout the middle ages, it helped to ignite the Renaissance, for example in the humanistic philosophy of Erasmus. Its influence is evident in the philosophies of Descartes, Spinoza, Kant and Hegel, being central therefore in the development of western philosophy. In more recent years Michel Focoult and Pierre Hadot advocated for reviving Stoic philosophy as a way of life, through the called “spiritual exercises”.

In our days, philosophy has become an subject of study, a topic for discussion or an academic pursuit. We tend to study philosophy as we study philology. But in Hellenistic times philosophy was meant to be lived.

Henry David Thoreau explained the differece beautifully in his book Walden, Life in the Woods;

“There are nowadays professors of philosophy, but not philosophers.
Yet it is admirable to profess because it was once admirable to live. To be a philosopher is not merely to have subtle thoughts, nor even to found a school, but so to love wisdom as to live according to its dictates, a life of simplicity, independence, magnanimity, and trust. It is to solve some of the problems of life, not only theoretically, but practically.”