Since writings by ancient Stoic women unfortunately did not survive, I have been looking for writings and quotes by modern women, that could have been written or inspired by ancient Stoics. Doing some research I came across French philosopher Simone Weil.  Her brilliance, ascetic lifestyle  and knowledge made her a unique philosopher, half anarchist half mystic. 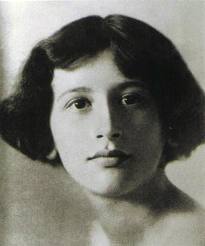 Simone Weil’s lifelong philosophical inquiries came from many sources, but the ancient Greeks were the most important of all; she was a precocious student, proficient in ancient Greek by age 12. Despite her professed pacifism, she fought in the Spanish Civil War on the Republican side. She wrote extensively with both insight and breadth about political movements of which she was a part and later about spiritual mysticism. Her book The Iliad, or the Poem of Force is one of her most celebrated works- an inspired analysis of Homer’s epic that presents a nightmare vision of combat as a machine in which all humanity is lost.

Although born into a secular Jewish household and raised in “complete agnosticism”, she later became a Christian mystic. But Weil did not limit her curiosity to Christianity. She was keenly interested in other religious traditions—especially the Greek and Egyptian mysteries; Hinduism, and Mahayana Buddhism. She believed that all these and other traditions contained elements of genuine revelation. After a lifetime of battling illness and frailty, Weil died in August 1943 from cardiac failure at the age of 34.

Weil’s biographer Gabriella Fiori wrote that Weil was “a moral genius in the orbit of ethics, a genius of immense revolutionary range” and Albert Camus described her as “the only great spirit of our times”.

“If we go down into ourselves, we find that we possess exactly what we desire.”

“We have to endure the discordance between imagination and fact. It is better to say, “I am suffering,” than to say, “This landscape is ugly.”
“Attachment is the great fabricator of illusions; reality can be obtained only by someone who is detached.”
“All sins are attempts to fill voids.”

“The sea is not less beautiful in our eyes because we know that sometimes ships are wrecked by it.”

“Imagination and fiction make up more than three quarters of our real life.”

“You could not be born at a better period than the present, when we have lost everything.”
“To be a hero or a heroine, one must give an order to oneself.”
“Attention, taken to its highest degree, is the same thing as prayer. It presupposes faith and love. Absolutely unmixed attention is prayer.”
“We are drawn towards a thing, either because there is some good we are seeking from it, or because we cannot do without it. Sometimes the two motives coincide. Often however they do not. Each is distinct and quite independent. We eat distasteful food, if we have nothing else, because we cannot do otherwise. A moderately greedy man looks out for delicacies, but he can easily do without them. If we have no air we are suffocated, we struggle to get it, not because we expect to get some advantage from it but because we need it. We go in search of sea air without being driven by any necessity, because we like it. In time it often comes about automatically that the second motive takes the place of the first. This is one of the great misfortunes of our race. A man spokes opium in order to attain to a special condition, which he thinks superior; often, as time goes on, the opium reduces him to a miserable condition which he feels to be degrading; but he is no longer able to do without it.”
“One recognises that the partisan spirit makes people blind, makes them deaf to justice, pushes even decent men cruelly to persecute innocent targets. One recognises it, and yet nobody suggests getting rid of the organisations that generate such evils.”
“The sum of the particular intentions of God is the universe itself.”
“But a better remedy is indifference to ourselves, and being happy because the good is good, although we are far from it and may even suppose that we are destined to remain separated from it forever.”
“Contact with the sword causes the same defilement whether it be through the hilt or the point.”