“Walking is a virtue, tourism is a deadly sin.”

“I climbed a path and from the top looked up-stream towards Chile. I could see the river, glinting and sliding through the bone-white cliffs with strips of emerald cultivation either side. Away from the cliffs was the desert. There was no sound but the wind, whirring through thorns and whistling through dead grass, and no other sign of life but a hawk, and a black beetle easing over white stones.”

Bruce Chatwin wanted to go to Patagonia because it was the most far-off land humans have walked on foot since they came out of Africa. Bruce Chatwin’s exquisite account of his journey through Patagonia teems with evocative descriptions, remarkable bits of history, and unforgettable anecdotes. Fueled by an unmistakable lust for life and adventure and a singular gift for storytelling, Chatwin treks through “the uttermost part of the earth”— that stretch of land at the southern tip of South America, where bandits were once made welcome—in search of almost forgotten legends, the descendants of Welsh immigrants, and the log cabin built by Butch Cassidy. An instant classic upon publication in 1977, In Patagonia is a masterpiece that has cast a long shadow upon the literary world.

A TIME OF GIFTS

In 1933, at the age of 18, Patrick Leigh Fermor set out on an extraordinary journey by foot – from the Hook of Holland to Constantinople. Fermor is considered by many to be one of the great travel writers in our time. He kept journals, and added and embellished what had not occurred to him at nineteen when he was walking to Constantinople.

“I found my mind wandering at games; loved boxing and was good at it; and in summer, having chosen rowing instead of cricket, lay peacefully by the Stour, well upstream of the rhythmic creaking and the exhortation, reading Lily Christine and Gibbon and gossiping with kindred lotus-eaters under the willow-branches.”

A Time of Gifts is the first volume in a trilogy recounting the trip, and takes the reader with him as far as Hungary. It is a book of compelling glimpses – not only of the events which were curdling Europe at that time, but also of its resplendent domes and monasteries, its great rivers, the sun on the Bavarian snow, the storks and frogs, the hospitable burgomasters who welcomed him, and that world’s grandeurs and courtesies. His powers of recollection have astonishing sweep and verve, and the scope is majestic.

West with the Night

“I have learned that if you must leave a place that you have lived in and loved and where all your yesteryears are buried deep, leave it any way except a slow way, leave it the fastest way you can. Never turn back and never believe that an hour you remember is a better hour because it is dead. Passed years seem safe ones, vanquished ones, while the future lives in a cloud, formidable from a distance.”

West with the Night is the story of Beryl Markham–aviator, racehorse trainer, and her life in the Kenya of the 1920s and ’30s. The magical prose and window into worlds of East Africa provided by this memoir is in itself  a delight, but Markham was moreover and interesting historical figure for her achievements in aviation and adventuring. For example, she was the first female bush pilot in the continent, the first woman to complete an East-to-West nonstop crossing of the Atlantic.

“There are all kinds of silences and each of them means a different thing. There is the silence that comes with morning in a forest, and this is different from the silence of a sleeping city. There is silence after a rainstorm, and before a rainstorm, and these are not the same. There is the silence of emptiness, the silence of fear, the silence of doubt. There is a certain silence that can emanate from a lifeless object as from a chair lately used, or from a piano with old dust upon its keys, or from anything that has answered to the need of a man, for pleasure or for work. This kind of silence can speak. Its voice may be melancholy, but it is not always so; for the chair may have been left by a laughing child or the last notes of the piano may have been raucous and gay. Whatever the mood or the circumstance, the essence of its quality may linger in the silence that follows. It is a soundless echo.”

This letter from Ernest Hemingway to Maxwell Perkins in 1942 sums up the book better than I ever could:

“Did you read Beryl Markham’s book, West with the Night? I knew her fairly well in Africa and never would have suspected that she could and would put pen to paper except to write in her flyer’s log book. As it is, she has written so well, and marvelously well, that I was completely ashamed of myself as a writer. I felt that I was simply a carpenter with words, picking up whatever was furnished on the job and nailing them together and sometimes making an okay pig pen. But [she] can write rings around all of us who consider ourselves writers. The only parts of it that I know about personally, on account of having been there at the time and heard the other people’s stories, are absolutely true . . . I wish you would get it and read it because it is really a bloody wonderful book.”–Ernest Hemingway

THE ROAD TO OXIANA

“Somebody must trespass on the taboos of modern nationalism, in the interests of human reason. Business can’t. Diplomacy won’t. It has to be people like us.”

Robert Byron was an eccentric traveler that set out on a journey through the Middle East via Beirut, Jerusalem, Baghdad and Teheran to Oxiana -the country of the Oxus, the ancient name for the river Amu Darya which forms part of the border between Afghanistan and the Soviet Union.

The Road To Oxiana has been called the seminal travel book of the twentieth century. Witty, lyrical, erudite, combative, expresses the force and complexity of his author’s character. Composed in the form of a random diary, its deceptive conventional style is just the result of meticulous craft.
When Paul Fussell “rediscovered” The Road to Oxiana in his recent book Abroad, he whetted the appetite of a whole new generation of readers. In his new introduction, written especially for this volume, Fussell writes: “Reading the book is like stumbling into a modern museum of literary kinds presided over by a benign if eccentric curator. Here armchair travellers will find newspaper clippings, public signs and notices, official forms, letters, diary entries, essays on current politics, lyric passages, historical and archaeological dissertations, brief travel narratives (usually of comic-awful delays and disasters), and–the triumph of the book–at least twenty superb comic dialogues, some of them virtually playlets, complete with stage directions and musical scoring.”

“In the desert I had found a freedom unattainable in civilization; a life unhampered by possessions, since everything that was not a necessity was an encumbrance. I had found too, a comradeship inherent in the circumstances, and the belief that tranquility was to be found there.”

“Arabian Sands” is Wilfred Thesiger’s record of his extraordinary journey through the parched “Empty Quarter” of Arabia. Educated at Eton and Oxford, Thesiger was repulsed by the softness and rigidity of Western life-“the machines, the calling cards, the meticulously aligned streets.” In the spirit of T. E. Lawrence, he set out to explore the deserts of Arabia, traveling among peoples who had never seen a European and considered it their duty to kill Christian infidels. His now-classic account is invaluable to understanding the modern Middle East.

The Places in Between

In January 2002 Rory Stewart walked across Afghanistan-surviving by his wits, his knowledge of Persian dialects and Muslim customs, and the kindness of strangers. By day he passed through mountains covered in nine feet of snow, hamlets burned and emptied by the Taliban, and communities thriving amid the remains of medieval civilizations. By night he slept on villagers’ floors, shared their meals, and listened to their stories of the recent and ancient past. Along the way Stewart met heroes and rogues, tribal elders and teenage soldiers, Taliban commanders and foreign-aid workers.

Through these encounters-by turns touching, con-founding, surprising, and funny-Stewart makes tangible the forces of tradition, ideology, and allegiance that shape life in the map’s countless places in between.

“I thought about evolutionary historians who argued that walking was a central part of what it meant to be human. Our two-legged motion was what first differentiated us from the apes. It freed our hands for tools and carried us onthe long marches out of Africa. As a species, we colonized the world on foot. Most of human history was created through contacts conducted at walking pace, even when some rode horses. I thought of the pilgrimages to Compostela in Spain; to Mecca; to the source of the Ganges; and of wandering dervishes, sadhus; and friars who approached God on foot. The Buddha meditated by walking and Wordsworth composed sonnets while striding beside the lakes.
Bruce Chatwin concluded from all this that we would think and live better and be closer to our purpose as humans if we moved continually on foot across the surface of the earth. I was not sure I was living or thinking any better.”

THE MIRROR OF THE SEA

First published in 1906, The Mirror of the Sea was the first of Joseph Conrad’s two autobiographical memoirs. Discussing it, he called the book “a very intimate revelation. . . I have attempted here to lay bare with the unreserve of a last hour’s confession the terms of my relation with the sea, which beginning mysteriously, like any great passion the inscrutable Gods send to mortals, went on unreasoning and invincible, surviving the test of disillusion, defying the disenchantment that lurks in every day of a strenuous life; went on full of love’s delight and love’s anguish, facing them in open-eyed exultation without bitterness and without repining, from the first hour to the last.”

The Art Of Travel 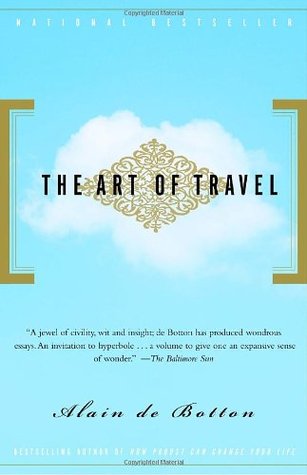 Alain de Botton doesn’t write where to travel but more importantely, why. De Botton considers the pleasures of anticipation; the allure of the exotic, and the value of noticing everything from a seascape in Barbados to the takeoffs at Heathrow.

Even as de Botton takes the reader along on his own peregrinations, he also cites such distinguished fellow-travelers as Baudelaire, Wordsworth, Van Gogh, the biologist Alexander von Humboldt, and the 18th-century eccentric Xavier de Maistre, who catalogued the wonders of his bedroom. The Art of Travel is a wise and utterly original book.